PARK(ing) Day is an annual international event in which metered parking spaces are transformed into temporary public parks, gathering places, or works of public art by citizens, activists, and industry professionals.

The idea behind PARK(ing) Day is to encourage people to rethink the way streets are used. Midtown Sacramento’s creativity was on full display last year with re-imagined spaces lining 20th street between J and K on Friday, September 20th. The various interpretations of a park, a gathering space, or a work of public art were diverse and exciting. We saw a lot of clever thinking, ranging from interactive spaces with temporary basketball courts in one stall to civic-focused park-like seating with a wooden tree installation in another.

The Williams + Paddon team decided to design a work of public art and developed Tessellate, which was created from a series of 12x12x12 kraft cardboard boxes, constructed in a mosaic pattern to represent the urban grid. Pops of color were added to highlight the importance of parks in forming identity and community in the City of Sacramento.

To cover (a plane surface) by repeated use of a single shape, without gaps or overlapping.

From the outset, the team’s stated design goal was to create something spatial, economical, recyclable, thought-provoking, and extraordinary. As passersby strolled through the arch of boxes, with the sun glistening through the orange cellophane, questions were sparked. People asked, what was the purpose, what was the intended use and, who are Williams + Paddon Architects + Planners? Exactly the types of questions we hoped to evoke and get the opportunity to answer! 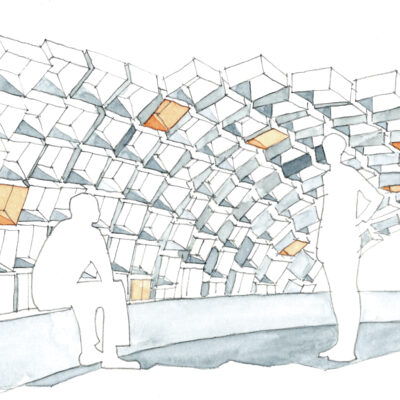 At Williams + Paddon Architects + Planners, we are a design firm first and foremost. In the most basic definition, we create plans to be executed in the building, renovation, or interior design of a structure. But, more importantly, we think outside of the box, we are creative, we are artistic, we are forward-thinking. Events such as PARK(ing) Day, give us the opportunity to flex our design muscles and to be unbound by standard building guidelines.

Our PARK(ing) Day team consisted of an enthusiastic group of employees from all parts of the firm, which generated just the right synergy of creativity, logic, and hands-on skills.

Each member had different ideas, but the team worked together to merge them into a cohesive plan. The perspectives contributed by the varied team members brought a rare element to the project, one which ended with the group unanimously opting for a minimal, yet beautiful design.

A conceptual computer model was built to determine the basic size and form, but most of the design decisions were made through building. As assembly of the structure began, unintentional shifts were created, which added unique elements and made the project even more inventive. One of the major considerations was how to suspend the boxes in midair. Through testing and prototyping, the team found that using paracord as a tension device, pulling back on the boxes that wanted to tip over, made for an elegant and practical solution. 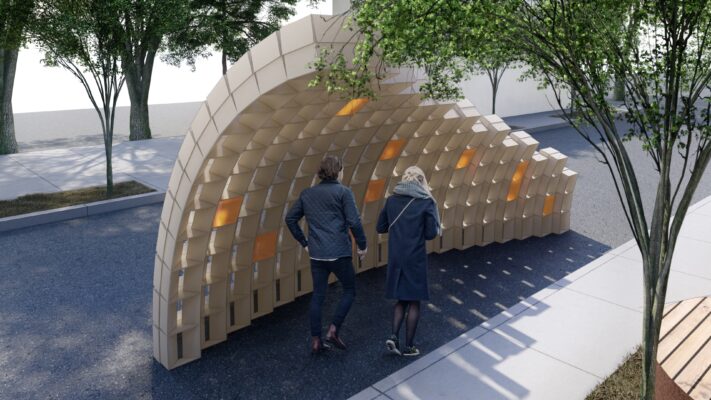 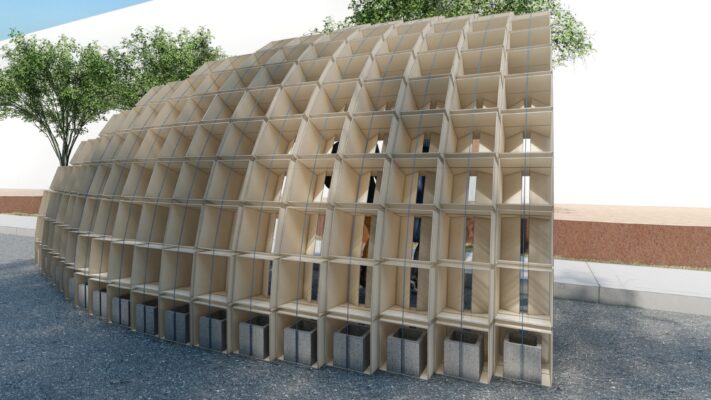 The team was offered a space at the Ice Blocks, by supporter and Ice Blocks owner, Mike Heller, which provided them a place to explore and experiment with various build techniques. As always, the design process is inherently iterative, which was proven during this exploration. By physically modeling and testing different ideas, a better project outcome was achieved. With the increase in software technology in the Architecture industry, less physical modeling and testing takes place, so the PARK(ing) day project was a great way for our team to reconnect with the physical realm. 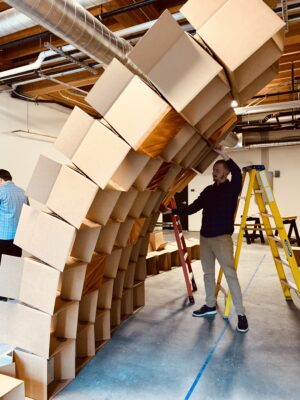 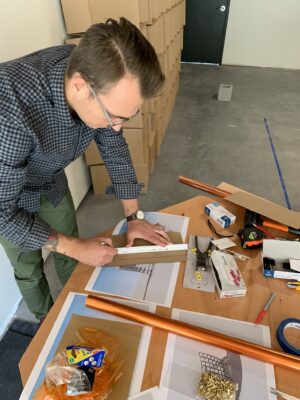 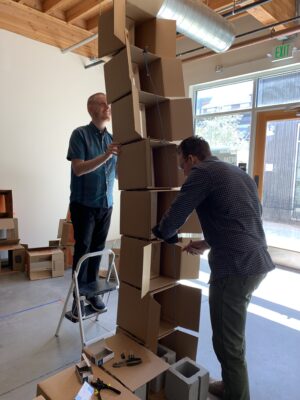 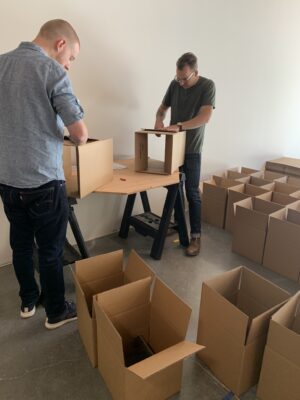 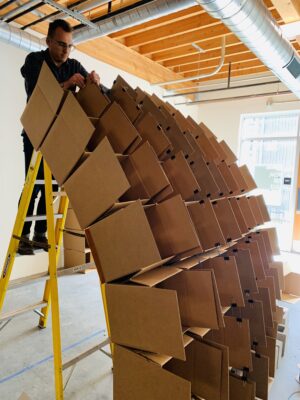 The final test in the model came the day of the event. Disassembling the structure for transport was given just as much consideration as assembling it, since it had to be transferred to the installation site on the day of. This was accounted for by numbering each box to determine its place in the overall matrix, and binder clips were used to connect columns of boxes together to reduce the time needed to erect the structure. On September 20th at 6:00 a.m., the team loaded the columns of numbered boxes, CMU bases, and any extra materials and tools needed into a U-Haul and drove them to 20th street. Items were unloaded, and assembly began. Sections were raised into place, and binder clipped together. The tension in the paracord was adjusted to accommodate for on-site conditions, and the CMU blocks were placed at the base to steady the structure. 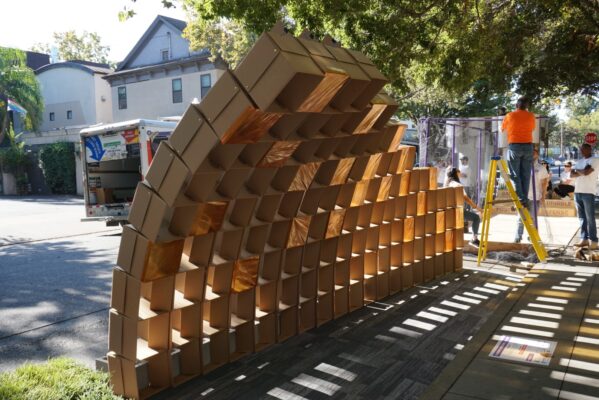 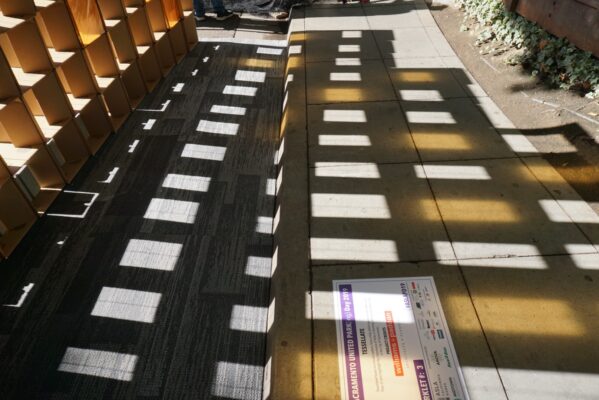 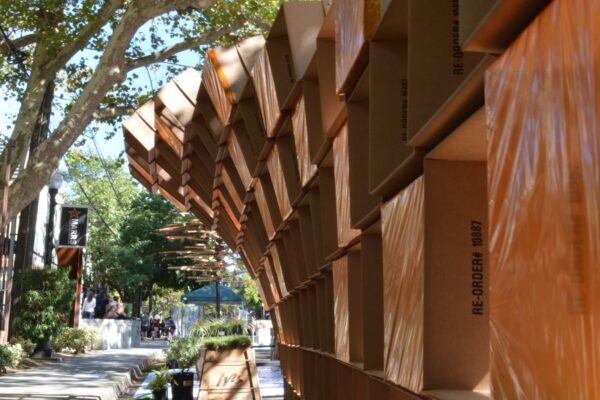 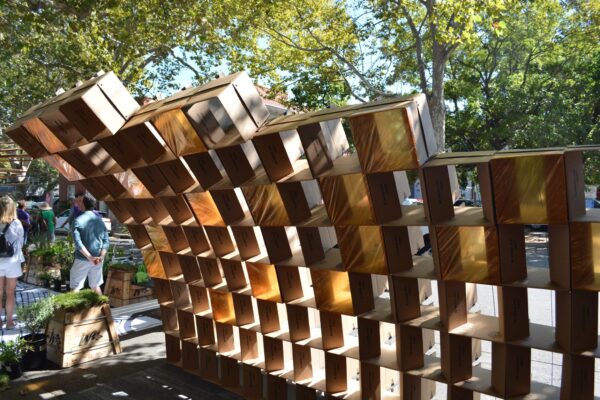 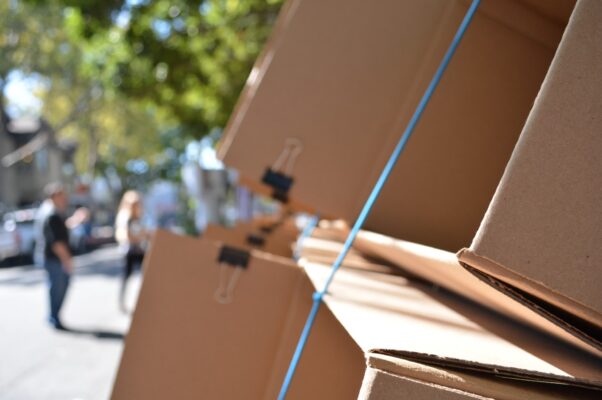 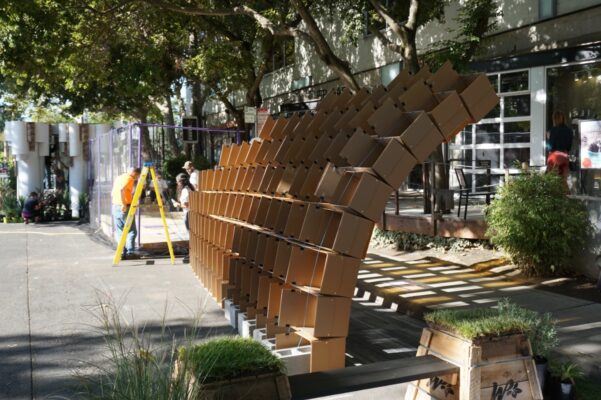 The installation was a success and stood out from its counterparts as more of an art display than a temporary park. Creative, thought-provoking and original—something Williams + Paddon strives for. Aside from the fun, participating in events like PARK(ing) Day allows us to step away from our daily work and think unconventionally. It grants us an opportunity to be a voice in the design community and to share our vision, as well as connect with the public and peers in the industry. In the end, we step away from these types of projects with our creative juices flowing. As a company and as a team, that’s a win!